Inspired by the life and work murder of Richard Montague, a brilliant and controversial logician at UCLA who was found strangled in his Beverly Hills home in 1971.  Montague’s radical claim was that there was no theoretical difference between natural and formal languages – in other words, a language like English could described using the techniques of mathematical logic.

I first came across Montague as a student in the 1980s and was intrigued both by his theory and the circumstances surrounding his death.  In 2005, I was awarded a Thayer fellowship at UCLA where Montague’s archives are held and spent time with the LAPD Cold Case detective working on Montague’s case. 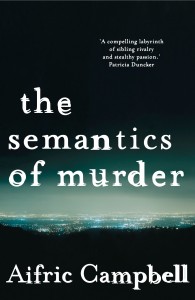